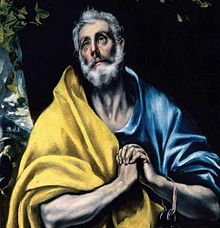 St. Peter's Basilica is one of the largest churches in the world, built on the burial site of St. Peter, one of Christ's apostles, on Vatican Hill in Vatican City.St. Peter's Church is the oldest in the city of Munich. Built in 1180, the church has had a interesting Blessing.


Peter is one of the twelve apostles of Jesus. He is often talked about in the New Testament.Saint Peter's Square is a large plaza in front of St. Peter's Basilica in the Vatican City, Rome. The Pope frequently addresses pilgrims gathered in the square.

Posted by Peter@Saint Patrick's School at 09:13

Email ThisBlogThis!Share to TwitterShare to FacebookShare to Pinterest
Labels: Saint.R.E.Recording.

I am a Year 4 student at Saint Patricks School in Auckland, NZ. I am in Room 6 and my teacher is Mrs. Twomey